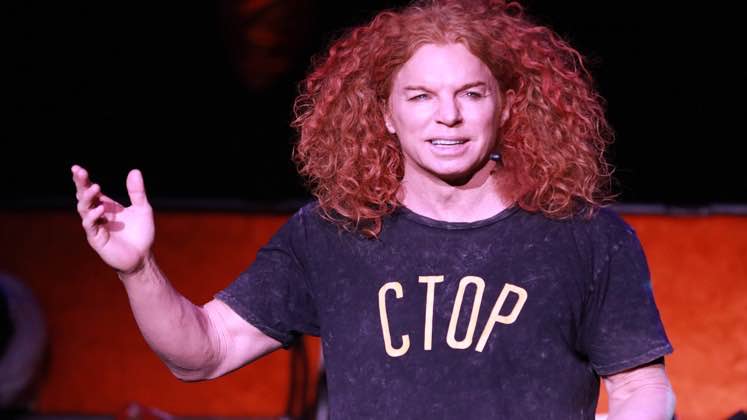 Carrot Top was born as Scott Thompson on February 25, 1965 in Big Bear City, California. There is some confusion about Carrot Top’s birth year of his own making, since he has given it as 1967 and 1969 in other interviews.

Carrot Top grew up in Florida where his father, Larry, was a scientist at NASA. He is a graduate of Florida Atlantic University in Boca Raton. When someone suggested he try out for the college talent show, he attempted tried a few old jokes.

Carrot Top quickly realized that he wasn’t as funny as some of his contemporaries, at least right now. Seeing funny signs in his neighborhood, he realized he could bring those on stage and get laughs with them. Among early signs was one for “Butts Road” and another for “Neighborhood Crime Watch”, which he would say it took an hour for him to steal. The signs got a lot of laughs and Carrot Top began to pursue prop comedy in earnest, creating his own props rather than using found objects like the signs.

A typical Carrot Top stage show features him in a multi-colored outfit and several trunks. Carrot Top will go to the trunk and pull out an item, which appears to be a single item. But then, by manipulating the prop, it’ll reveal the first item is also a second item. Sometimes that second item makes it appropriate for use by a famous celebrity or stereotyped group of people. These combination items are presented at a rapid clip, so that if one doesn’t get laughs, the next might.

Outside of stand-up, Carrot Top made a foray into movies, starring in 1988’s Chairman of The Board. The movie was widely panned by critics.

In recent years, Carrot Top has gotten into bodybuilding, which has given him a strikingly large upper body and arms. Combined with his mop of frizzy orange hair, some find his appearance a combination of amusing and disturbing.

Carrot Top is currently a top draw in Las Vegas, performing 15 weeks a year at the Luxor Hotel and Casino. He continues to tour regularly as well, often performing more than a 100 road dates a year.