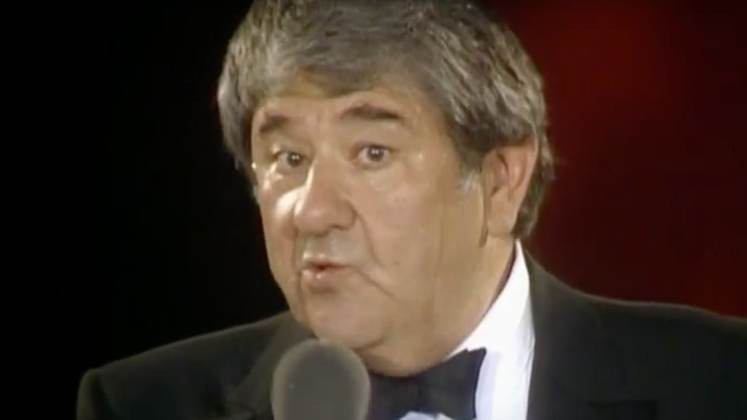 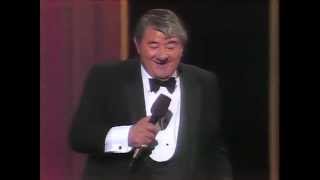 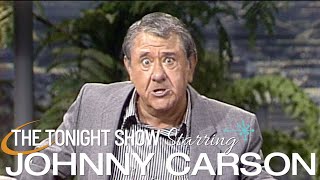 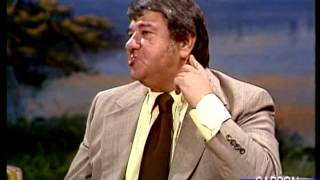 The imp of Vegas raunch comedy, Buddy Hackett peppered his with unabashed, cheerful vulgarity. He’d tell graphic sex anecdotes to shock the crowd into laughter—and get more coaxing a blushing lady at ringside into using four letter words too. Buddy’s teddy-bear body, goofy grin and babyishly nasal Brooklyn voice seemed to take the harsh edge away from the jokes. From another comic, the gags would seem like bullets crashing through a plate glass window. From Buddy, they were just spitballs bouncing off the school house door. He was crude but cute a baby proudly sitting in his soiled diaper.

At a 1989 appearance at the family oriented “Westbury Music Fair,” ads for Hackett’s show bore warning stickers: “Adult comedy at it’s best.” The comedy veteran had indeed changed from the 50’s and 60’s when he did silly, clean routines about Chinese waiters, dating and dieting.

Before he became comedy’s bad boy, Buddy did some boxing in his teens using the name “Butch Hacker.” Despite his sex-mad image, the kid from Brooklyn’s New Utrecht High School didn’t lose his virginity until after war service, at the age of 22. He became a comedian in the Catskills where he had earlier been a busboy and waiter. He came to Broadway for a show called “Lunatics and Lovers” and followed this with a 1956 TV sitcom called “Stanley,” playing a newsstand owner who gets into zany problems with his boss (Paul Lynde) and girlfriend (Carol Burnett). In night clubs, the 5’6” 200 pound pudge was known for his Chinese waiter schtick, playing a stereotyped but feisty Asian attacking his customers: “Spale lib or the egg roll? No spale lib and egg roll, spale lib or egg roll…no, no split ‘em up, I split you up you round-eyed iriot! What’s a ‘fly lice’? Fly lice is fly lice! Wattsamatta, can’t you speak Engrish?”

With his button eyes twinkling, his words shyly dripping out the side of his mouth, Hackett was, in Brooks Atkinson’s words, “large, soft, messy.” He was a natural to play babe-in-the-woods movie roles. Universal Studios hoped Buddy and Hugh O’Brien would be the new Abbott and Costello, starring them in “Fireman Save My Child.” Critics poured water on it, but Buddy went on to star in “Everything’s Ducky” in 1961 and “It’s a Mad Mad Mad Mad World” in 1964, still playing the fretting little boy, popping his eyes and gasping at the havoc he caused. He even sang playing the lead in Broadway’s “I Had a Ball,” a show about Garside the Great, a small-time Coney Island sideshow man.

Through the 60’s, Hackett’s little boy became blue. He said it began when he told risque jokes to a night club boss who insisted he tell them on stage to everyone. If the bosses didn’t mind risking walk-outs, neither did he. “Once you’re fillin’ the room you do what you want,” he said. At a banquet in Minneapolis, sharing the dais with then Vice President Hubert Humphrey, Hackett did a completely uncensored show—and was asked to leave. In the summer of 1970 Buddy strode onto the stage of the Kings Castle Hotel in Lake Tahoe naked—except for a jangling pendant hanging low from around his neck, swaying side to side, thigh to thigh.

For the next two decades, Buddy played Vegas and played naughty boy to Johnny Carson on “The Tonight Show,” mischieviously stretching the bounds of censorship by using “correct” names for anatatomical parts—and then going overboard with a deliberate (bleeped) obscenity. In 1980 Hackett tried a syndicated version of the old Groucho Marx “You Bet Your Life” show, but couldn’t find the blend of cuteness and outrageousness viewers could take on a daily basis.

An underrated actor, Hackett worked only sporadically in films and episodes of TV shows (“Murder She Wrote”). He won some good notices for his role in “God’s Little Acre,” and years later was highly effective in the challenging role of Lou Costello in the TV film “Bud and Lou.” He was able to sympathetically show both Lou’s quixotic temper and cuddly qualities—traits Buddy shared in real life.

Mostly Hackett was content performing stand-up loaded with joy-buzzer obscenity—harmless shocks. Though in his 60’s, no one thought of him as a dirty older man—just Buddy, the bad boy.