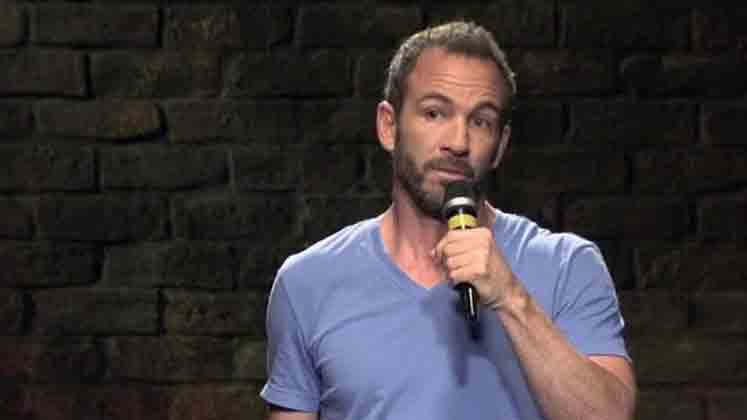 Bryan Callen is often recognized from his numerous film and television roles. Currently, he can be seen as Captain Frank Dashell, the leader of the Undead Task Force, whose job it is to rid the valley of Los Angeles of zombies, werewolves, and vampires in the MTV comedy series, “Death Valley.” He can also be seen in a stand-out performance in Lions Gate’s WARRIOR with Tom Hardy, which is playing in theaters nationwide. Earlier this year he played Samir, the Middle Eastern strip club owner/ gun runner in THE HANGOVER II, and in THE HANGOVER he played Eddie, the Middle Eastern owner of a wedding chapel. Next, audiences will be able to see him in his new one-hour special titled “Bryan Callen: Man Class,” which will premiere later this year on Showtime.

Born in the Phillipines, Callen spent the first fourteen years of his life overseas in countries like India, Pakistan, Greece and Lebanon, before moving to the US. He went to high school in Massachusetts and earned his BA in History at American University in Washington DC.

Callen began doing standup in New York in 1993 and in 1995, he moved to Los Angeles where he made his television debut as one of the eight original cast members on “MADtv” and he appeared on the show for two seasons, until 1997. His most popular characters included Pool Boy from Cabana Chat with Dixie Wetsworth and motivational speaker Al Casdy. Callen also performed impersonations of Bill Clinton, Robert De Niro, Luke Perry, Steven Seagal, Jim Carrey, Arnold Schwarzenegger, and Frank Gifford.

After leaving “MADtv,” he went on to play numerous roles on the small screen. He had a brief fling with Carrie Bradshaw on HBO’s “Sex and the City” where he played an overzealous lover who turns sex into a hydraulic experience, which she refers to as ‘jackrabbit sex.’ He also appeared as Kirstie Alley’s wisecracking assistant on Showtime’s comedy series, “Fat Actress.” In addition, he has snagged roles on “Californication,” “Oz,” “Entourage,” “7th Heaven,” “King of Queens,” “Stacked,” “Las Vegas,” “West Wing,” “News Radio,” “Significant Others,” “CSI,” “Law and Order: SVU,” “NYPD Blue,” “Suddenly Susan,” and “Frasier.” He can currently be seen as a recurring character on USA’s “In Plain Sight,” as well as CBS’s “How I Met Your Mother.”

On the big screen, Callen has been seen in numerous other movies including Todd Phillips’ OLD SCHOOL, SCARY MOVIE 4, BAD SANTA, and THE GOODS: LIVE HARD, SELL HARD, for producer Will Ferrell.

Between television appearances and making movies, Callen headlines clubs and colleges throughout the US and internationally. His numerous standup television appearances include Comedy Central’s “Live at Gotham” and CBS’s “The Late Show w/ David Letterman.” Callen is quickly becoming a recognizable face and his resume as an actor and standup comedian continues to swell.