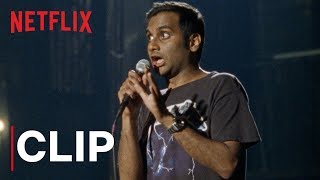 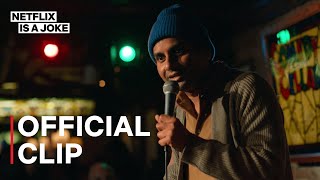 No Such Thing As Unskilled Labor | Aziz Ansari: Nightclub Comedian 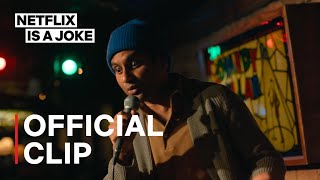 Aziz Ansari is quickly becoming one of the biggest names in comedy. He is currently starring in a popular television series, has a number of films on deck and recently debuted his first hour-long standup special and album. Entertainment Weekly has named him one of the top 12 “Future Stars of Comedy” and Paste Magazine recently named him one of the “Top 10 Comedians of the Decade.” The Hollywood Reporter said that he “has become one of the most prolific writers and performers on the comedy scene in recent years.”

Which performing in his comedy show Crash Test at the UCB Theater in NYC, he co-hosted the first and second show with Rob Huebel and Paul Scheer respectively. The trio would later form the sketch comedy group Human Giant.

Ansari currently co-stars opposite of Amy Poehler in the critically acclaimed NBC series, “Parks and Recreation,” which was recently renewed for a third season. In 2009 the series was named “Sitcom of the Year” by GQ and was listed as one of Time’s “Top 10 TV Shows of 2009.” Ansari’s portrayal of government employee ‘Tom Haverford,’ has earned him much critical praise including Entertainment Weekly naming him one of 2009’s “Breakout TV Stars,” TV Guide naming him a “Scene Stealer” and Yahoo! TV placing him in the number one spot on their list of “TV MVPS: The Most Valuable Performers of the Fall Season.”

This past January, Ansari released an hour long standup special on Comedy Central titled, “Intimate Moments for a Sensual Evening.” The special and subsequent DVD/CD were both extremely successful and the album continues to be a mainstay on iTunes’ comedy best-seller list. Ansari has also become a regular on the late night circuit with recent memorable appearances on “The Late Show with David Letterman,” “The Tonight Show with Conan O’Brien,” and “Jimmy Kimmel Live.” Additionally, Ansari is currently developing three films for Judd Apatow and Universal with Director Jason Woliner. The collaboration with Apatow began on Universal’s Funny People, where Ansari created the popular character of ‘Raaaaaaaandy,’ who went on to become a viral hit on FunnyOrDie.com. This summer he will appear in Get Him to the Greek alongside Russell Brand, Jonah Hill and Sean ‘Diddy’ Combs, as a co-worker of Hill’s character. Ansari also has had roles in the hit comedies I Love You, Man and Observe and Report.

Ansari will embark on a major multi-city standup tour this summer called the “Dangerously Delicious Tour.” He began performing standup in 2001 while attending NYU and continues to perform at venues all over the world today. In 2005, Rolling Stone named him their choice for “Hot Standup” on their annual Hot List, and he was also awarded the Jury Award for Best Standup at the US Comedy Arts Festival in Aspen in 2006. Ansari first came to audiences attention on MTV’s hit sketch comedy series, “Human Giant.” The series is based around short films starring Ansari, along with Rob Huebel and Paul Scheer. Many of their sketches have become internet sensations and have popularized the trio with young people all across the US. Ansari also had a very memorable guest starring role on HBO’s “Flight of the Conchords,” in which he portrayed a racist fruit vendor and was seen in a multi-episode arc on “Scrubs.”