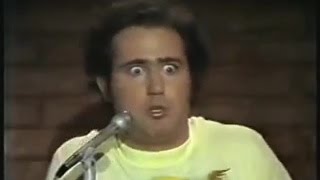 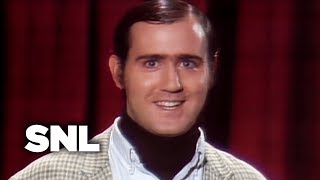 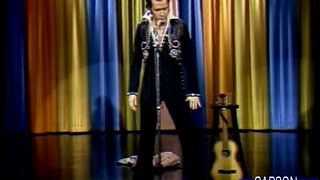 As a performance artist, Andy Kaufman was provocative and outrageous. But since the term “performance artist” was virtually unknown in the late 70’s, he was billed as a comic—which confused audiences who often found his anti-comic theatrical routines obnoxious and annoying.

In his time, Kaufman was praised in the same way critics raved over Andy Warhol’s soup can paintings, non-events and day-long movies. They admired his challenging and original vision. Especially since they weren’t paying to see it. Typical Kaufman stunts, like reading from “The Great Gatsby” or sitting and watching his laundry go around in a portable dryer on stage were hilarious—to hear as anecdotes. Not to sit through.

Along with a few other hip comics, Steve Martin and Albert Brooks, Andy Kaufman was unsatisfied by the awkward artificiality of stand-up. The whole idea of coming out and telling jokes to strangers was becoming a corny cliche. Kaufman chose to go after the audience—the passive, complacent people who were accepting such entertainment. Kaufman shook them up: by goading female ringsiders to come up and wrestle him, by deliberately telling bad jokes (as “The Foreign Man”), and by deliberately parodying such deadly old comic devices as funny faced lip-synching to records.

Some hip audiences shared the joke, singing along as he did every chorus of “100 Bottles of Beer on the Wall.” Other times, they threw ashtrays and screamed out curses. Often the audience didn’t know what to do; they chuckled uneasily, sensing something profound in his experimentation, not about to complain that they didn’t know what was going on.

In 1975 Kaufman began appearing on “Saturday Night Live,” but after a dozen outings, a put-on poll asking viewers their opinion of Andy backfired. They resoundingly voted him off the show. In February of 1981, Kaufman disgraced himself on the similar show, “Fridays.” His idea was to stage a mock-fight that would shock the audience. At first some questioned if it was real or just a joke. But either way, the consensus was that it was pretty stupid. His sister Carol recalled in Rolling Stone, “I don’t think “Fridays” was entertainment to the average person…with Andy, it all goes back to the self, the I. What am I going to get pleasure out of, not how am I going to pleasure the audience…they want him to tell jokes. But no. That would be selfless…”

Kaufman grew up a lonely kid involved in fantasy. He read wrestling magazines and collected Elvis Presley memorabilia. He was sent to a psychologist at one point. He was such a passive kid he’d get beaten up by a school bully and not even attempt to fight back. On stage, he turned passive-aggressive. Often he’d stretch out in front of the audience and pretend to go to sleep, the crowd trying to jeer him awake.

“I just want to play with their heads,” Andy remarked. He got away with it because he was so shockingly strange audiences were usually not sure what to do. Besides, no matter how obnoxious he was acting, there was a streak of vulnerability to him and a cute, bewildered look on that baby fatted young face. His most successful character, “The Foreign Man,” had the wide-eyed “help me” look of Jose Jimenez. He parlayed it into national popularity as “Latka Gravas,” the foreign cab man on “Taxi.”

Even on a fairly safe sitcom, Kaufman brought controversy. Many “Taxi” viewers felt his odd character, and episodes based on his comically weird European customs, ruined the realism of the show. Calling Taxi just “a vehicle” for money and exposure, Kaufman seemed content to mouth old burlesque catch-phrases (like a fast “tank you very much!”) and serve up silly double entendres (in his language, the sex act was called “nik nik.”). Later he began to demand scripts more in keeping with his experimental nature, like the one in which Latka undergoes a personality crisis and turns into an irritating creep named Vic Ferrari.

Meanwhile, in stand-up, Kaufman invented Tony Clifton, an egotistical Vegas lounge singer. As Kaufman’s “opening act,” Clifton would keep singing until the stage was littered with debris. Kaufman insisted Clifton was real, not a character, and insisted on letting the opening act stay on for hours. It was just the latest example of Kaufman lacking the discipline to get off a worn-out put-on.

Still, Kaufman had a cult that included other comics. “It was great to watch the audience watching him,” Robin Williams recalled. Comics admired Andy for his completely opposite stance—a comic who’d do anything not to get a laugh. While most comics wanted applause and “love” Andy seemed to enjoy being hated. David Letterman booked him, saying “I think it’s important to have guests who annoy the public.” Kaufman wanted to guest on Letterman’s show in December of 1983 so he could perpetrate a good gag. Letterman would be scripted to ask, “What did you get for Christmas, Andy?” And Andy would answer, “Cancer.”

Once again, the line between Kaufman’s life and his art was blurred. He didn’t do the show. He did die of cancer a few months later. When the news first hit, many were skeptical. They assumed it was just Andy going too far for a gag.