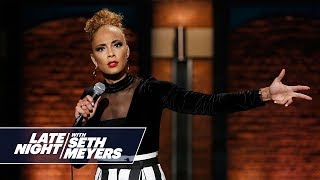 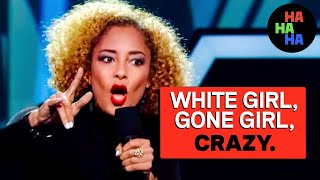 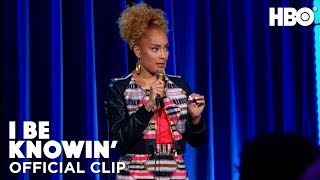 Being A Woman Is A Journey | Amanda Seales: I Be Knowin’ | HBO

With an uncanny knack for taking serious topics (racism, rape culture, sexism, police brutality, etc.) and with humor, making them relatable and interesting, she combines intellectual wit, irreverent silliness and a pop culture obsession to create her unique style of smart funny content for the stage and screens.

Along with performing stand up across the globe, and touring colleges doing comedic lectures on everything from sexism and diversity, relationships to black popular culture, this former MTV VJ with a master’s in African American studies from Columbia University is a series regular as Tiffany on HBO’s “Insecure”, named by Time Out LA as one of 2017’s comedians to watch, is creator/host of LA’s hit comedy game show, “Smart Funny & Black,” at Nerdmelt, speaks truth to change via her wildly popular instagram and monthly column “Amandaland” at InStyle Mag, has written/produced/starred in two seasons of her scripted comedy, Get Your Life, available on www.Blavity.com and went viral after articulately and passionately confronting Caitlin Jenner on issues of race and equality in America, during a live streamed dinner, hosted by Katy Perry, on Youtube.

A Jedi Khaleesi with a patronus that’s a Black Panther with wings, Amanda Seales continues to keep audiences laughing, thinking, and living in their truth!