Aspen, besides hosting the annual industry event, is primarily known for it’s slopes. But I won’t be hitting them. And why, if you indulge me, is comedy related.

Late 2001, I took a Level 1 Improv class with the UCB (back when you had to stand in line to sign up for classes). I don’t consider myself a performer, but I thought it would help me a faster writer - more trusting of my first thoughts. Though I was nervous, the group mind encouraged by Armando Diaz was very powerful and you quickly felt safe enough to just play.

To my shock, my play demonstrated to me that my comic persona was Chris Kattan - far from the wit I had imagined myself. In future improv classes, I would settle down. But for the time being I was embracing turning off my ever-chattering brain to let my body initiate and respond to my partners however it felt like. 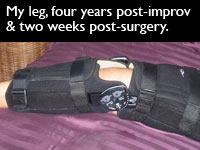 So when I initiated a scene where I ran at my scene partner while pretending to hold a football, I was purely focused on the joy of just flopping around on stage. While attempting to avoid my scene partner’s grasp by hurdling a chair Hertz-style like O.J. Simpson, I landed with a far too straight leg. I went down thinking of nothing but pain - the worst I’d ever felt before or since.

Class was paused. A ice-cold soda can was produced in lieu of actual ice. I think my partner inappropriately felt incredibly guilty, but I don’t know as my screaming knee swallowed up any empathy that was coming my way. The pain dulled after a few minutes, I managed to finish the class and hobbled on it for a couple days.

Late last year I finally had surgery to fix the joint. Turns out I had managed to give myself an Anterior cruciate ligament (ACL) tear - an actual football injury from playing fake football. Though I walk just grand now - no sudden pain or “floating sensations”, Doc says it’s six months ‘til I can do anything like skiing. So in Aspen, I’ll just be focusing on the performances, hoping nobody else has to live a cliché like I did.

BOY! Talk about commitment. It’s like you made an injury real by your belief in it :) I’m gonna use it in my classes! Hope youre better!

Commenting is not available in this channel entry.
Previous:
Heading to Aspen
Next:
Random Aspen Notes