Upcoming Book: “And Here’s the Kicker” 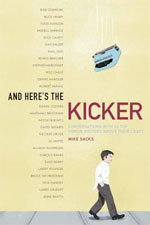 I want to give a little heads-up on an upcoming book by my good friend Mike Sacks. Sacks has interviewed over twenty comedy writers and humorists for the upcoming book And Here’s the Kicker, which promises to be a definitive work on comedy writing.

The great thing about the book is that Sacks is not wedded to one comedy tradition - talking to folks as diverse as Al Jaffee (Mad Magazine) to David Sedaris to Bob Odenkirk. And Sacks, as he’s a funny guy in his own right, gets it. So he doesn’t ask the same questions these people are usually asked. He knows those answers. So Sacks goes further, drawing out rare insight into the process of making the funny.

A couple of excerpts are up on the website for And Here’s the Kicker right now. Here’s an excerpt from the excerpted Stephen Merchant interview. He talks a little bit about The Office‘s first fortunately unseen pilot:

The show just wasn’t funny if we were approaching it as a sitcom. It’s only amusing if you think of it as a real place being filmed by a documentary crew. The documentary seemed so vital at that point, because it seemed like all the jokes were dependent on the way that the character David Brent wanted to portray himself versus the way he was being portrayed by the documentary crew.

Another thing we did was remove the voice-over track with documentary-style narration. This helped, because in the end it meant there wasn’t an explicit editorial voice. This allowed David Brent to just dig his own grave.

Kicker is targeted to aspiring comedy writers, so that’s a great lesson for ‘em. Arguably most essential trait of The Office and Ricky Gervais and Merchant missed it when translating it the first time. Just a great lesson for just trying an idea - as a creator, how would you know the strict documentary feel was important for all the reasons Merchant outlines here? You’d probably only know if you’d seen The Office without them..

Mike also interviewed the recently deceased Irving Becher, a comedy writer who wrote for the strong>Marx Brothers and Milton Berle. The man’s memory is positively incredible - his story of how he came to write for Berle is excerpted on the Kicker site. Two wonderful details from it. The first, Becher’s ad in Variety that got Berle’s attention:

Positively Berle-Proof Gags. So Bad That Not Even Milton Would Steal Them. The House That Joke Built.

And the second, which might explain Becher’s memory, his first encounter with Berle was while Uncle Milty was naked. And yes, he saw it. At least enough of the legendary member to have it burn this story into his memory.

There’s more, a lot more, in the book. Including conversations with Robert Smigel, Harold Ramis, Arrested Development‘s Mitch Hurwitz, The Colbert Report‘s Allison Silverman and Dave Barry. And Mike’s working on getting a couple of things included, space permitting, that would be the most comedy nerdgasm inclusions ever. I’ll keep you posted. In the meantime, know that And Here’s the Kicker hits bookstores in July of 2009.

All I can say is fuck you for getting me so excited about a book that I can’t read for seven months.  Fuck you.

this sounds terrific. i will have to check it out.

Commenting is not available in this channel entry.
Previous:
Review: Aaron Karo’s “Just Go Talk to Her”
Next:
Flight of Conchords Season 2 Premiere Up Now