My good friend Julie Seabaugh, who I’ve taken more than a couple of cues from as far writing about comedy, attended the music fest Sasquatch. But instead of the music, sheengorged herself on the offerings from the comedy tent, a welcome new addition to the fest. Here’s her report.

Though it’s the seventh go-round for the rural Washington-state music gathering known as Sasquatch!, 2008 was the first year the hairy-palmed hootenanny hosted a Comedy Tent. And while David Cross/Aziz Ansari/Nick Kroll’s first-and-only rendition of “You Might Be a Deadneck If…” at Bonnaroo 2007 set the bar impossibly high for all future festival lineups, the Sasquatch names, considering the Tent’s infancy, were impressive in their own right. Among the high- and lowlights: 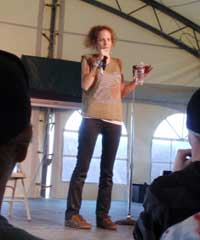 Lines to get into the comedy tent. Always an encouraging sign…

Another report (and more photos) to come later from Julie on the rest of the doings at the Sasquatch comedy tent.