Review: Stephen Colbert’s “I Am America (And So Can You!)” 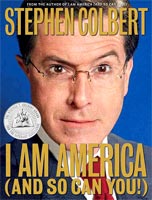 One of the things people wonder about “The Colbert Report” is: “How long can they keep this joke going?” At almost two years now, the character of “Stephen Colbert” shows very few signs of wear. The book “I Am America (And So Can You!)”

is a little risky to the persona. You don’t have the contained screwball charm of Stephen Colbert, the person, to back up the jokes. For more than a few of the jokes to land, you have to have that character in your head and read in his cadence. The writers even somewhat acknowledge this in the second chapter:

“That was a joke, in case you couldn’t tell. I don’t blame you if you couldn’t. Can’t tell if someone’s making a joke if you can’t see that person’s face. Big reason I don’t like books. No faces. Can’t tell when they’re being funny.”

Of course, quite brilliantly, they put a picture of Stephen’s smiling face right in the margin there. Still, I wouldn’t necessarily recommend this book as someone first exposure to Colbert. But for members of the Colbert Nation, this book is just about perfect.

The book is constructed as opinions on facets of American life (including Family, Religion and Sports) and everything considered to oppose it, which is roughly every other chapter. The essays have plenty of lists, pull quotes and factoids - making it perfect for jumping right in anywhere instead of reading cover to cover. In keeping close to the show’s segment “The Word”, the margins of the text have additional jokes in red - although these are more throwaways rather than counterpoints as they often are in the show. It can get a little distracting going back and reading each little joke as you go through the text, but if you’re reading in nuggets rather than chapters, tracking down every joke should be just fine.

Probably because I did read it straight through, some of my favorite parts of the book are the breaks from the character in Stephen Colbert via essays from characters who agree with Stephen Colbert. My favorites among them are God on why he doesn’t answer prayers and the reader’s soulmate who tortures us with the knowledge that she/he would have been right there if we had just made a different choice with our lives. Perhaps some of the most brutal gags in the book are in “The Fun Zone” section particularly in a word find for racist words and a match the ball sack to the neutered dog game which includes Bob Barker as one of the choices.

Not every Colbert show joke makes it into the book - particularly surprising is the lack of an “Alpha Squad 7 Tek Jansen Adventure” - I don’t think it’s even mentioned in the book. Maybe this might take away from Colbert’s calls on publishers to pick up the unpublishable book on the show. Or perhaps, it’s just perfect for the sequel.

One of the most valuable parts of the book is the complete transcript of Colbert’s now legendary address at the 2006 White House Correspondents Dinner. It’s one of the shining lights of satire in this century and done straight in the face of those who needed to hear it most. This book’s not for them, but for those who recognize truthiness when they see it and find reveling in it, rather than cursing it, to be the best way of getting through to 2009.

There is also an audio book of “I am America.”  Too bad its abridged but it should be fun to listen to.

Thank you, Todd Jackson, for your very positive review of Stephen Colbert’s book. My son-in-law, Rich Dahm, is a writer and co-executive producer on “The Colbert Report.” Everyone at the show appreciates and values the loyalty of Stephen’s fans so much. As Stephen himself suggests, buy multiple copies of the book!

There is a tiny (and I mean, TINY) mention of Tek Jansen in the book. It’s one of the text nuggets in the bottom margin, which states that Stephen has had hundreds of girlfriends. Sound familiar? 😉