Comedian Mike DeStefano died from a heart attack late yesterday. DeStefano’s comedic life was defined by fearlessly broaching the hardest and darkest parts of the rest of his life. The comedian was a former heroin addict and HIV positive. He lost his wife Franny to AIDS and then soon after, his father, with whom he had a tempestuous and complicated relationship. 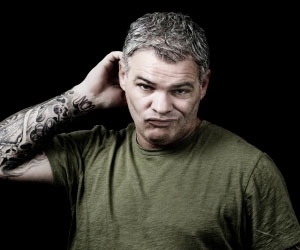 Much of this was discussed in his recent one-man show “Drugs, Disease and Death: A Comedy” The show was produced by my friends at Cringe Humor, who became incredibly close with Mike. If there was anybody who was a reflection of what a Cringe comic is, DeStefano was it. He was a master of comedic alchemy - changing pain (lead) into humor (gold). For such miraculous events, gasps musts accompany the laughs.

“Drugs, Disease and Death” was a work in progress, but still a triumph for the comedian. The version I saw was one of the more joke-heavy versions of the show, but I was told the night before there were tears from Mike as he recited his story. Fully realized, balancing the emotion and humor, I have no doubt that it would be a comedic milestone for any who saw it. I’m blessed that I saw him and feel great sadness that so many others will not.

I’m going to share the following clip of Mike, even though it’s not representative of how funny the man was. But it’s probably the best reflection of him as a man. It’s rare in life to know the best thing you ever done. Mike did. It’s called “Franny’s Last Ride” and it’s from The Moth. (Updated video from the official Moth YouTube Channel. And as Sean McCarthy points out, this is from HBO’s Aspen Comedy Festival.)

Update: CringeHumor is planning on showing footage they shot from “Drugs, Disease and Death” for an upcoming show at the Barrow Street Theater. Proceeds will go to the Narcotics Anonymous charities that DeStefano worked with. Originally, DeStefano was supposed to do his one-man show “A Cherry Tree in the Bronx” at Barrow Street on Wednesday, March 9th.

Mike was a truly gifted comedian who used his challenges to bring laughter to many people.  We’ll miss you Mike

This is so sad! I just discovered Mike DeStefano on this website last week, and watched a bunch of his clips. A brilliantly funny guy. My condolences to his friends and family. RIP :-(

A terrible loss to the comedy world.

Terrible shame the great comics that have died recently.  DeStefano was an amazing comic, brutally truthful, and side-splitting.

He was a great standup and he will be missed greatly.

Mike DeStefano was a brave bright blunt storyteller who saw light in dark places. Wish I had seen him live.

I never got to see the guy perform, but just watching how he telll the story of his wife and how she felt like Mike ‘treated her as of she was already dead’ remind me of how my aunt must gave felt while she was suffering from an level 4 brain tumour.

I bet the man was a real funny guy. Comedian can learn a small lesson from the man. Never be afraid to show you emotion about something that either bothers you or compells you to move forward in life, After all its these emotions that drive alot of our jokes.

What is the emotion behind the joke.

Commenting is not available in this channel entry.
Previous:
Tina Fey’s “Bossypants” - What’s Wrong with this Picture?
Next:
Catch a Risen Star: Tips for Comedy Club Drop-Ins