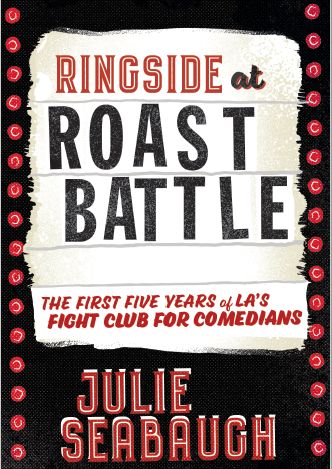 Roast Battle is pretty much an international comedy phenomenon now - with TV versions not just in the States but in the UK, Mexico and South Africa. But the roots of it aren’t really known. Usually changes in Comedy are told after the fact - years later. It’s rare that we get a document of a Comedy movement or scene as it happens. Julie Seabaugh’s “Ringside at Roast Battle” is that rare document.

Julie’s a friend, so I had the pleasure of reading the whole book before it went to press. I did it in a single train ride and was captivated to learn the origins of Roast Battle. Julie’s been attending and chronicling Roast Battle since almost the begining. She wasn’t there for the parking lot beef that got brought inside to be settled with Verbal Violence. But for almost everything else - the involvement of Jeff Ross, DJ Coach Tea, the Wave – she saw how it grew and became a part of the show organically. It’s not clean or easy. Some elements – and people – get left on the march to TV.

Julie puts you deep in the Belly Room, with the assistance of Tony Conrad’s incredible photographs of the show. If you love the ethos of Roasting - the idea that we could all be equal as targets – you should check this book out.

“Ringside at Roast Battle” is available at Amazon.