With his diverse interests and tendency to be a one-man band (including drawing the album cover and directing the music video), I’ve been curious to see what exactly a series from Demetri Martin would turn out to be. Here’s the first indicator, a teaser of “Important Things with Demetri Martin” from Comedy Central.

Well that doesn’t tell us too much, does it? The part the holds the most promise for me is the sketch between Martin and Jon Benjamin with the type overlaid describing the real feelings and experiences. Particularly if the scene plays straight without them, it seems that’s a fertile conceit to use again and again.

The other thing that I kind of adore already is the logo for “Important Things”, which is a very simplified version of da Vinci’s “Vitruvian Man”, which is a symbol of the Renaissance. With Martin’s play in multiple artistic fields, I’ve always kind of thought of Martin as a sort of comedy Renaissance Man, someone who’s simply programmed to extend his creative energy in multiple directions at once. It’s a nice little acknowledgment of that to watchers that some of them might get even subtlety. It also indicates a respect the audiences’ brains, which is a hallmark of Jon Stewart, who’s the co-producer of the show.

Of course, there’s always that danger of being All-Trades Jack rather that Vitruvian da Vinci. We’ll know more on Wednesday, Februrary 11 at 10:30 PM, when “Important Things with Demetri Martin” premieres on Comedy Central.

Update: I knew there was a reason why I liked this image. Demetri used something like it when we created a web feature on him at Comedy Central in 2002. See below: 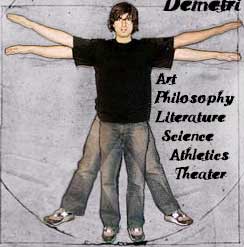 I don’t know, Todd, couldn’t this guy have come up with something with a bit more pizzazz? I mean even a white board with a dry erase marker (hey, maybe two or three different colors even) might make for a more visual fiesta here.

I guess in Samuel Beckett’s great absurdist play, “Waiting for Gadot,” the only prop is a pole or a post or something. And hey, in this masterpiece of world lit, only two actors carry the entire three hour absurdist extravaganza. Maybe it’s that kind of dog & pony show, or maybe, perhaps, I should say, a fly and mouse show.

Dude you obviosly dont get demetri martin’s comedic preference if you suppose that he needs a little more “Pizzaz”. He isnt about flashy style. What he does is make simple things hilarious. He’s more like a modern Seinfeld, where the not-so-obvious things in our every day environment become jokes of noteworthy genius.

Commenting is not available in this channel entry.
Previous:
PBS Looks into What Will “Make ’Em Laugh”
Next:
Letterman Rights the Bill Hicks Wrong