There’s no way of making sense of this, but Greg Giraldo is dead at the age of 44. His death comes just five days after he was found unconscious in his New Jersey hotel room, reportedly due to a overdose of prescription medication. Friend and fellow comedian Jim Norton was the first to relay the news through his twitter account. 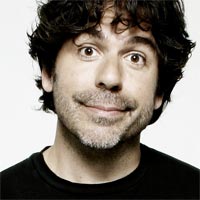 The man made a lot of people laugh hard, me included. This is one of the bits that always got me, no matter how many times I heard it. It’s called “Death by Chocolate” and it starts about two minutes into this clip.

I am absolutely speechless. I cannot believe this happened

Very, very sad. He was one of my favorite comedians - I was just commenting the other day how I’d hope to see him live someday. :(
RIP.

Um this really makes me sad. He spoke the truth but made it funny so it wasnt to hard to handle. Sad sad day when America is full of fast food. Yes people dont have to shovel that stuff into there bodies but its hard to pass up when there is a fast food joint on every corner. I really found this guy to be hilarious. Sad =(

Unbelievable, in my eyes one of the funniest and made me laugh so many times even alone. I heard and saw everything he ever made. wev’e lost a hero and a briliant man. I hope there’s coke and streapers wherever he may be. RIP.

I am so sad about Greg’s death he was one of the stand comic’s that I looked up too in my comedy career.

What a loss, this guy made me laugh every time. he will be missed.

He was very funny and very under appreciated . One of the funniest comics ever . He will be missed and always remembered . Would have loved to see him and Norton on the same bill one day , but I guess I’ll just have to settle for Jim . Love you Jim Norton .

What a loss. I remember him on Tough Crowd With Colin Quinn and the guy always made me laugh. He had that edgey, shameless type of comedy I love.

Commenting is not available in this channel entry.
Previous:
Donald Glover: Gross
Next:
Tina Fey’s “Bossypants” - What’s Wrong with this Picture?