Donald Glover opens his show with a warning: he’s not so good of a comedian that you should stick around if you vomit on yourselves, which apparently happened with one woman at a gig. He certainly wouldn’t stay, even if it was a Zombie Bernie Mac show at the Apollo. 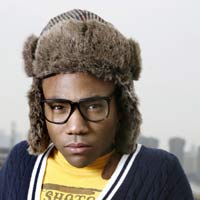 Glover is definitely funny enough to stick around for in all kinds of uncomfortable states, but despite the title of his show, I couldn’t think of why anybody would vomit on themselves. Maybe my tolerance for body gags is far higher than the aforementioned woman, but I don’t think Glover is delivering grown-up Garbage Pail Kids jokes on stage.

This is some great shit about shit in Glover’s show. A female friend of Glover’s tells him she’d shit on anyone attempting to rape her, sparking some amazement from Glover that she can do that on command. Glover claims him and his asshole are always on their third date (“I’m not ready…”). And the show closes with a story about how he and his foster siblings would deal with their time at Home Depot (“Auchwitz for Children” Glover claims.). It involves the toilet section of the store. Saying more would spoil it.

As Glover points out, the N-word isn’t a big part of his life. Race is not something that he’s immune too, which become obvious as he relates the groundswell internet campaign for him to play Peter Parker in the next Spider-Man movie. A consistent reference point for those who opposed him as the webslinger seemed to be Shaft and actors like Michael Cera playing theblaxploitation anti-hero (Glover appropriately points out that this casting would too be awesome). Fanboys seemed to assume that Shaft would be an equivalent sacrilege for Glover, who sincerely loves Spider-Man as much as they do.

Glover does cover race a bit in his act, but the targets of racist words aren’t him or other blacks. They’re inanimate objects, like his seatbelt or slightly more animated objects, like Denise Richards. The distinction between whites and blacks are still there, but Glover grew up with enough colorblind friends that can’t see why he can’t play pranks on random white women.

It’s not post-racial. We’ll never be post-racial. As Glover prescribes, we all need to start using the N-word for everything. Once everything can be called that, once everything is dragged to that bottom, it’ll be meaningless. But as Glover warns, “We’re going to lose some of you white people in the process.”

Great post. If you’ve ever seen Glover’s impressions of Chris Rock and Tracey Morgan, you know he covers race but with a fresh take. He’s also just a great joke writer. I’m trying my hand at it but keep working to get to Donald’s level.

Donald is really making a name for himself. Happy to hear. He’s great on Community. So pumped for season 2! Just reserved a copy of Season 1 DVD! Kepp up the good work, Donald!

Why is there no page for donald in the comedians section?!?!?!?!?

I always thought Pier 1 Imports was Auchwitz for children.  At least at Home Depot you can ride on the flatbed carts.

LMAO! We might lose a few white folks=huge understatement!

Commenting is not available in this channel entry.
Previous:
Jamie Kilstein: No War, No God, No Nickelback
Next:
Greg Giraldo Dead at 44