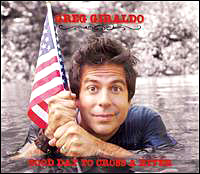 . This clip involves America and its eating habits and it’s one of my favorites ever since I first saw Giraldo perform it as part of the Insomniac Tour

. The CD will be released tomorrow, October 24.

Commenting is not available in this channel entry.
Previous:
Interview: Steven Wright, Stand-Up Comedian
Next:
A Preview of Christian Finnegan’s “Two for Flinching”